The Divided States Of Climate Action

A Data Dive On How U.S. State Legislators Are Dealing With The Climate Crisis (Or Not)

When it comes to the climate crisis, we don’t have time to waste. Congress - and of course the President - get a lot of attention when it comes to addressing (or failing to address) climate change. But state-level action is just as essential.
‍
State legislators have the power to decide whether electricity comes from clean energy or fossil fuels. They determine whether to address unequal pollution in communities of color or let environmental injustices continue. And they can set standards that lock us into heavily-polluting cars or transition us to clean transportation.

Action at the state legislature level is crucial to solving the climate crisis. But state legislatures are chronically under-resourced - and the elections that determine who fills these state-level seats are mostly overlooked. The problem is complicated by large numbers: there are 7,383 state legislators, and there is no central reporting body that aggregates the decisions made by these legislators on climate issues.

To solve this, Climate Cabinet’s public database of state legislature voting records makes it possible to do detailed analyses of climate voting trends across states. The database contains a “Climate Cabinet Score” for every incumbent state legislator across 10 key battleground states: Arizona, Colorado, Florida, Georgia, Iowa, Michigan, North Carolina, Pennsylvania, Texas, and Wisconsin. We calculated these Scores (ranging from 0-100) by compiling every environmental vote taken by each legislator in the last available session, with a double weight for climate-related votes. A Score of 0 means that last session, they never voted pro-climate; 100 means they always did.

Then, we took these Climate Cabinet Scores and started asking questions: What votes went into these Scores in different states? How do they interact with a legislator’s party affiliation and their district’s opinions about climate and clean energy? How vulnerable is each incumbent on November 3rd?

When you look at the legislation being voted on in each state, it’s clear that there’s a deep divide between states’ climate agendas. Take Colorado versus Arizona: two states in the same region that are facing massive impacts from climate change.

Last year, the Colorado state legislature took floor votes on nine climate bills, including a statewide Climate Action Plan, energy efficient building codes, encouraging electric vehicles, and promoting a “just transition” for fossil workers. On the other hand, Arizona took floor votes on just three climate bills - all of which were barely related to climate at all. One of these bills was a budget that “did not address the climate crisis,” and another was an appropriations bill that shifted money from air pollution to water pollution efforts.

Broadly, you can categorize the 10 battleground states into 3 groups: “Gold Standard,” “On Defense,” and “Disinterested”.

Colorado has a pro-climate majority that brings climate action votes to the floor - and gets them passed. Colorado is a gold standard among these states, blazing the trail with Climate Action Plan legislation (HB 1261) that sets targets to reduce Colorado's carbon emissions 26% by 2025, 50% by 2030, and 90% by 2050 relative to 2005 levels. The bill passed and was signed by the Governor.

North Carolina, Pennsylvania, and Texas have faced an onslaught of regressive climate bills that the climate community has had to fight off. Instead of building for the future, these states are voting on bills that make us more reliant on dirty energy, or bills that block wind and solar jobs. For example, Pennsylvania’s HB 2154 would have rolled back protections for shallow oil and gas wells to 1980’s standards. These legislatures are actively tussling with core climate and energy issues, but they’re mostly moving in the wrong direction.

Despite the best efforts of activists, legislators in Georgia, Michigan, Iowa, Florida, Wisconsin, and Arizona haven’t faced many tough votes on climate change at all. Very few environmental bills in these states were related to the climate crisis. Legislation that did come up mostly dealt with public lands, parks, and water management - and often didn’t move the ball forward by all that much. For example, of the 2019-2020 environmental votes taken in Florida, only one really grappled with reducing emissions (SB7018, regarding electric vehicle charging and conservation easements). And in Arizona, the only marginally climate-related votes that came up dealt with the absence of climate funding in the state budget, and shifting funds from air pollution to water pollution.

These states have staunchly anti-climate legislative majorities, which likely has something to do with the low-impact bills that wind up on the floor for votes.

It’s not all bad: Georgia worked through transit issues and supported their solar industry last session, for example. But for the most part, these states did not consider legislation that would meaningfully address the climate crisis or build a strong clean energy economy.

State climate action, by the numbers

North Carolina, Pennsylvania, and Texas have faced an onslaught of regressive climate bills that the climate community has had to fight off. Instead of building for the future, these states are voting on bills that make us more reliant on dirty energy, or bills that block wind and solar jobs. For example, Pennsylvania’s HB 2154 would have rolled back protections for shallow oil and gas wells to 1980’s standards. These legislatures are actively tussling with core climate and energy issues, but they’re mostly moving in the wrong direction.To look at state progress another way, we can analyze the number of proactive versus reactive climate votes. If the pro-climate vote was “Yes” on every major piece of climate legislation, as it was in Colorado, that’s an indication that the climate bills were pushing the state forward (a “Climate Action Plan,” for example). If the pro-climate vote was “No” on all climate legislation, like it was in Florida, it indicates that pro-climate legislators were holding back a tide of negative bills. The notable exception here is Georgia, which saw solar and transit bills in the last session available from LCV, but still lacks climate legislation that matches the scale of the problem. 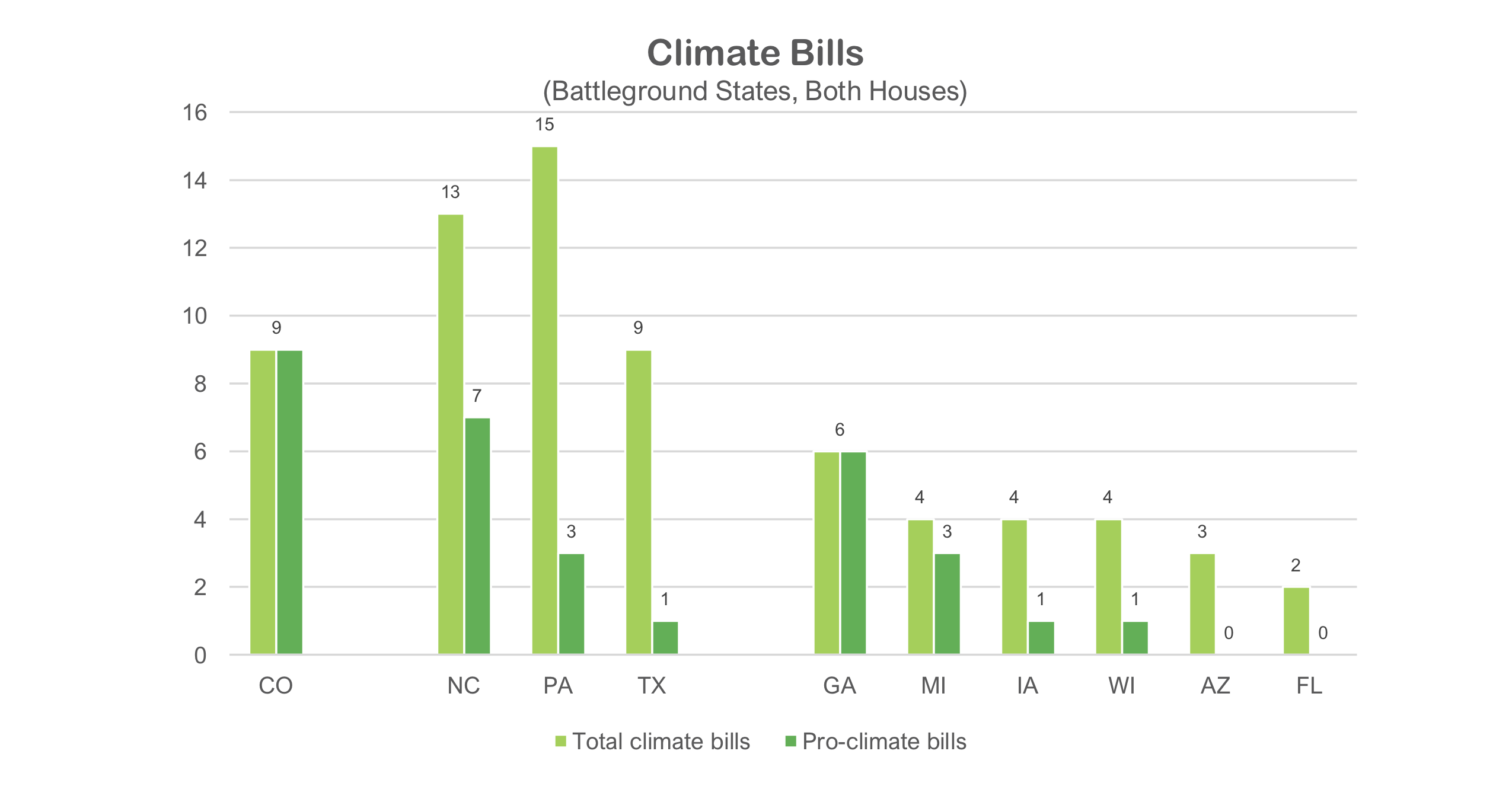 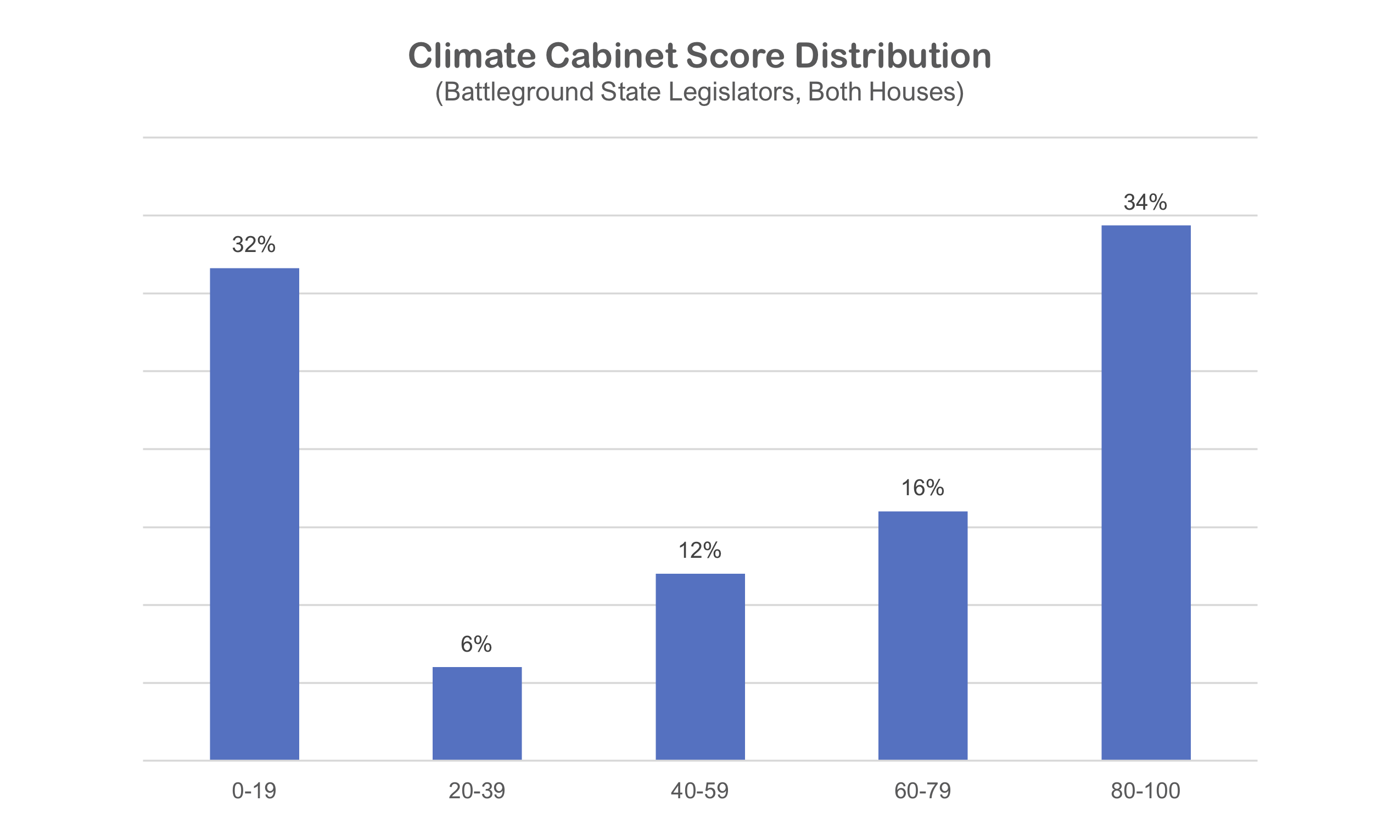 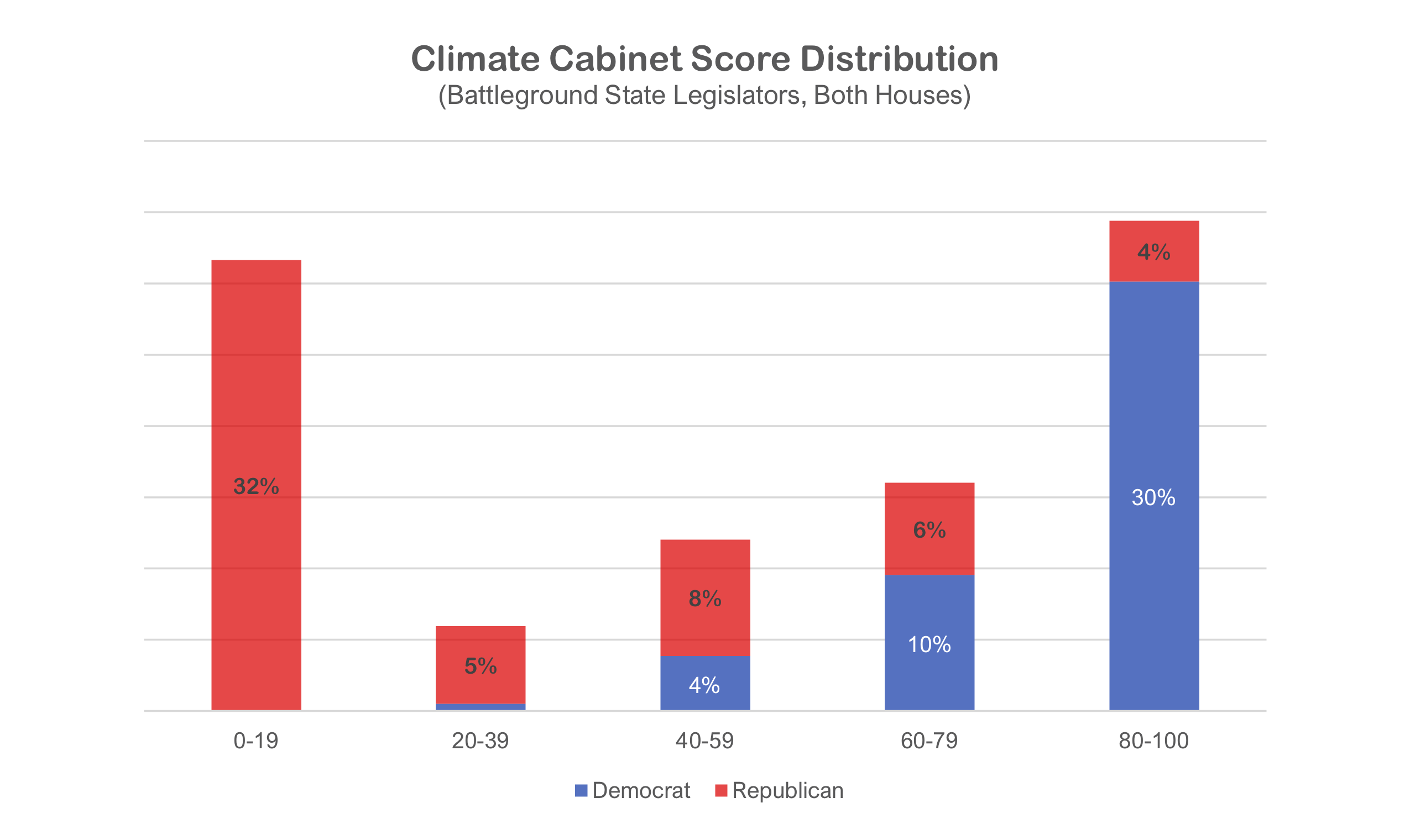 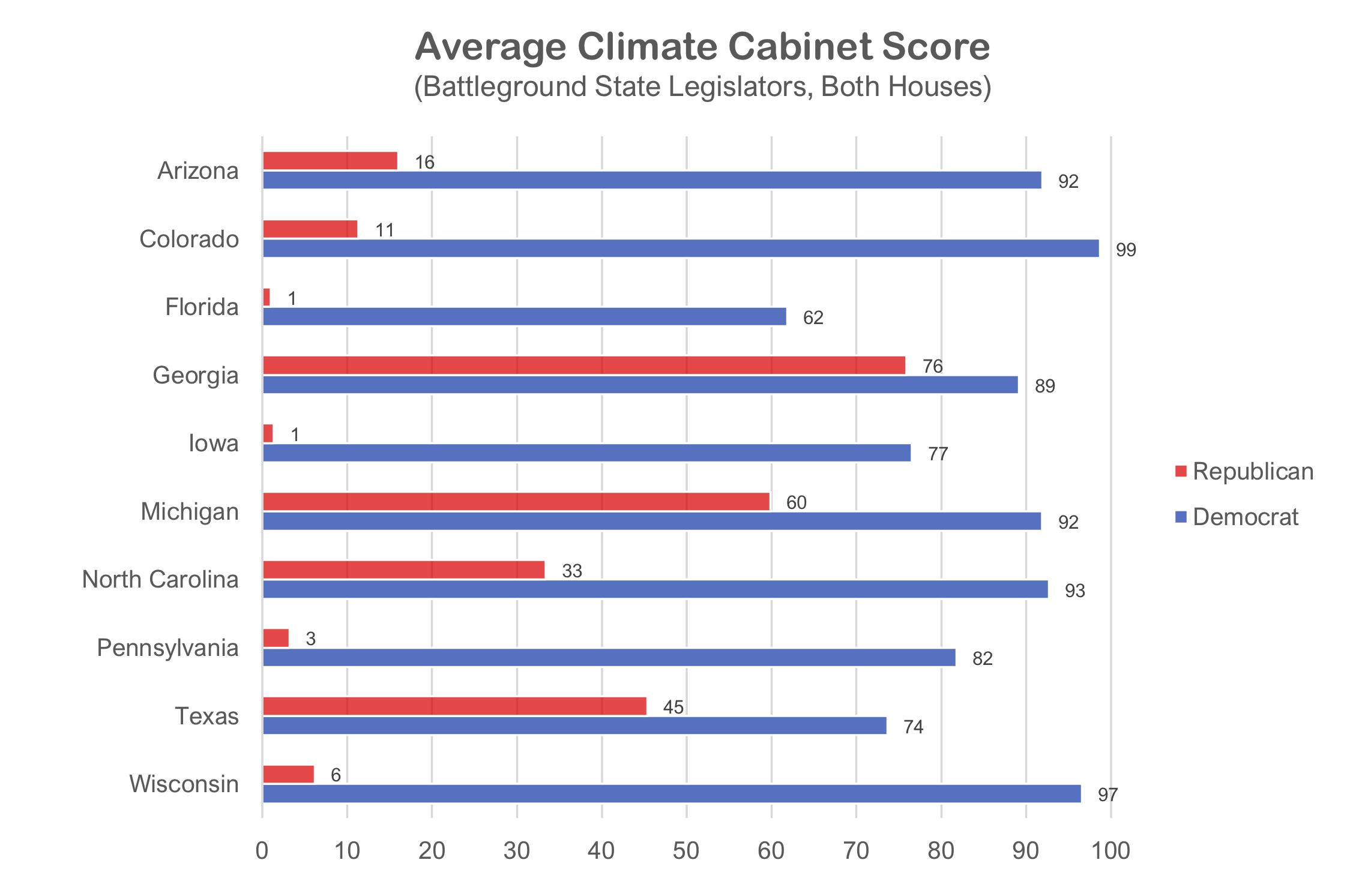 State legislators’ climate votes seem to reflect their party’s desires much more than their constituents’. This can be demonstrated by looking at the Climate Scores of legislators from “swing” districts:  districts that have bounced between different parties over the last few years. Take the Texas House, for example. 16 districts (out of 150) have “swung” between Democratic and Republican legislators since 2013. Each one of them shows the exact same pattern - when the Republican is in power, the district votes anti-climate, and when the Democrat is in power, it votes pro-climate, as seen by the Climate Score of the district over legislative sessions. Are constituents changing their mind that often about the climate crisis? Hardly. 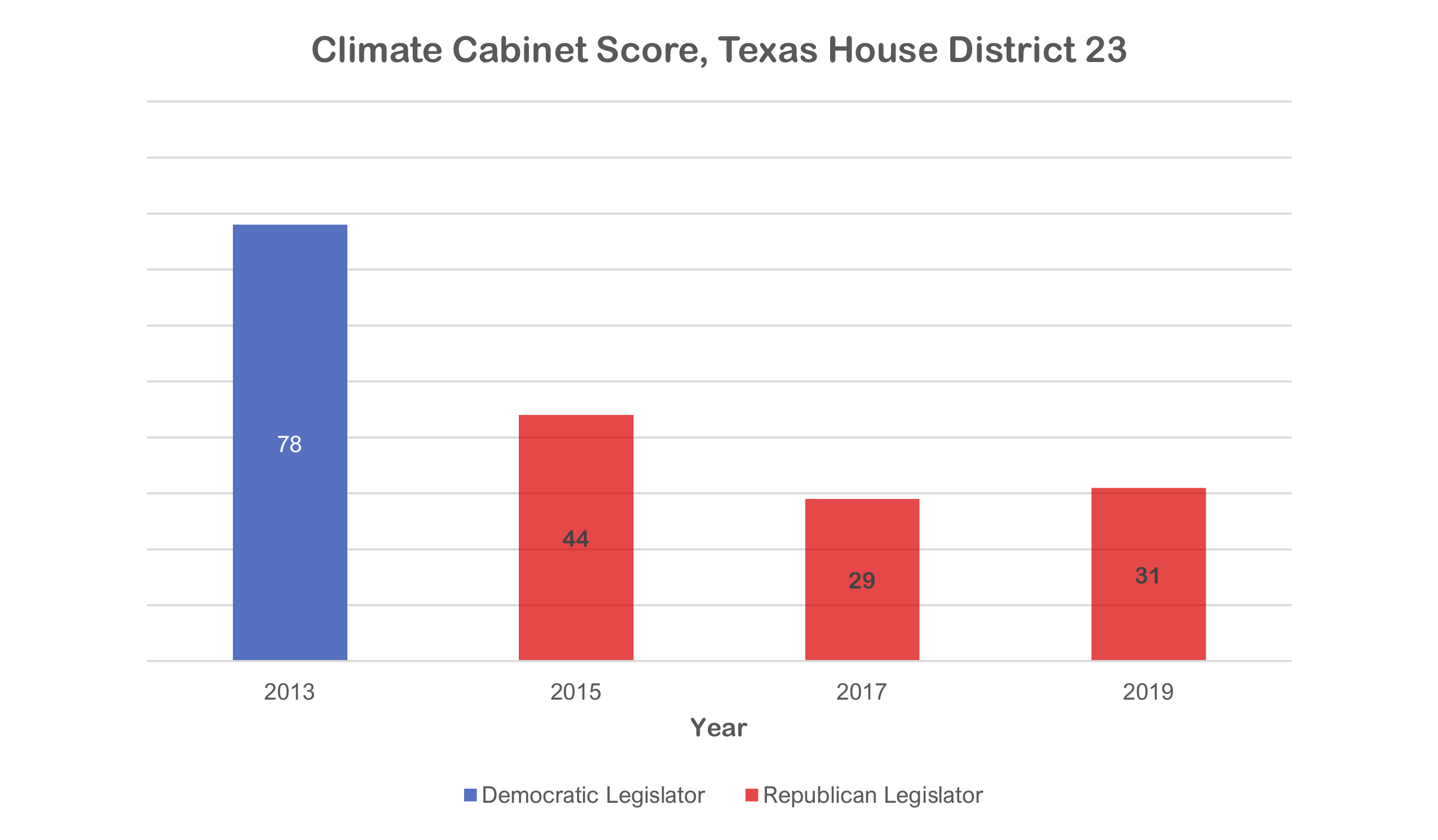 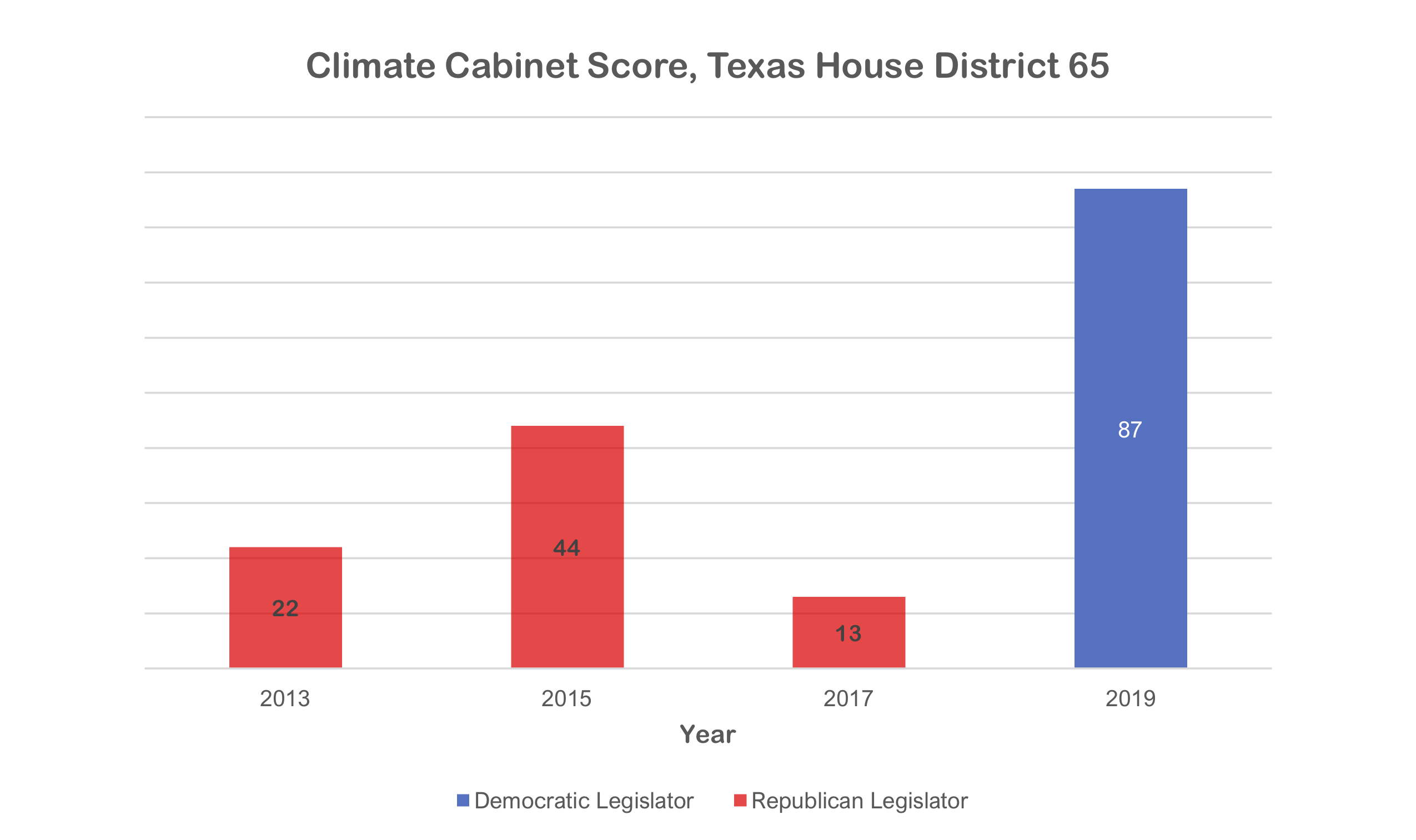 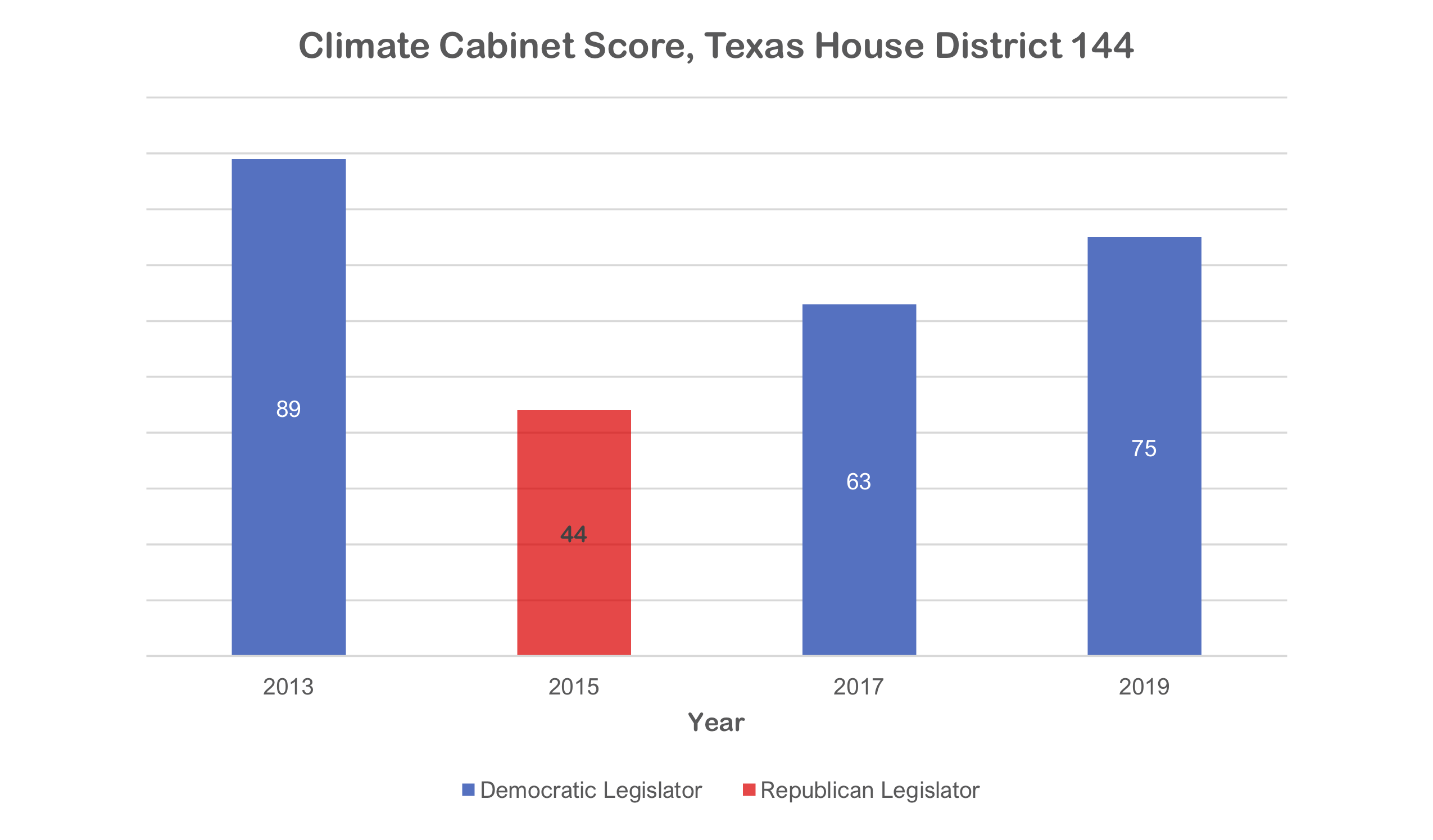 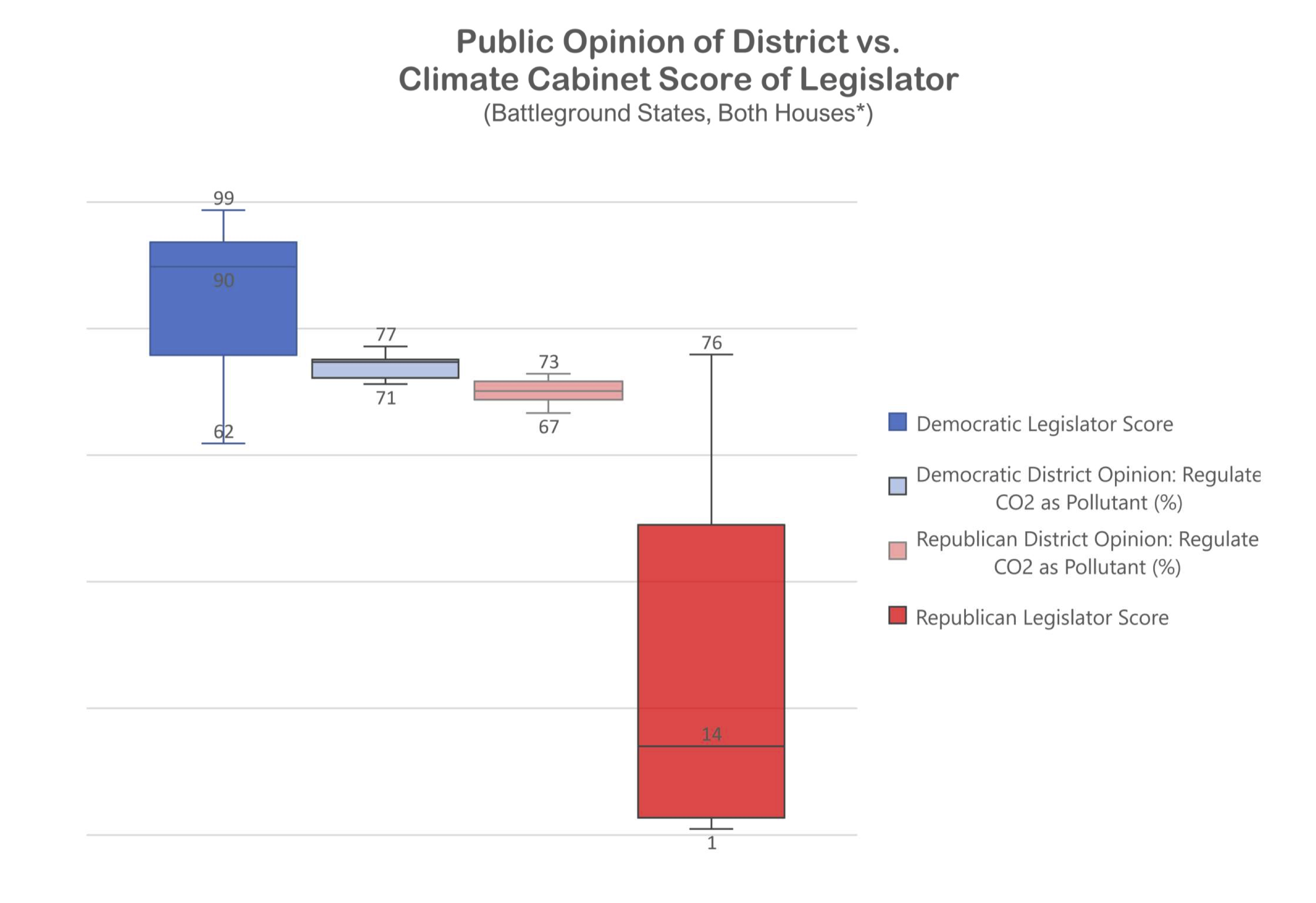 Vulnerable, but not accountable

As the previous section outlined, Republican state legislators are behind their own constituents when it comes to acting on the climate crisis.
‍
This brings up the question: does a Republican legislator that is particularly vulnerable (i.e. in a competitive district) shift their voting pattern to align with their constituents’ opinions?
‍
The short answer: slightly, but not enough to make a difference on climate. The charts below show the average Climate Cabinet Score for both Democrats and Republicans broken out by the vulnerability of their seat. Vulnerability was estimated using the district’s 2016 presidential election vote counts (a commonly used metric for vulnerability).
‍
We put state legislator incumbents in 3 categories of vulnerability: “Safe,” “Vulnerable,” and “Opposing”:
‍Safe: In the 2016 presidential election, the district voted FOR the incumbent’s party by a margin of more than 8 percentage points
‍Vulnerable: In the 2016 presidential election, the district voted FOR the incumbent’s party, but by a margin of less than 8 percentage points
‍Opposing: In the 2016 presidential election, the district voted AGAINST the incumbent’s party.
‍
As the box plots below demonstrate, vulnerability was not really a factor for Democratic legislators - they largely vote pro-climate irrespective of their district’s 2016 presidential results. There was a slight change for Republican legislators: the median Climate Cabinet Scores increased from 12 in “Safe” seats to 31 in “Opposing” seats. More vulnerable Republicans showed a slight increase in Climate Cabinet Scores, but still lag their constituents’ views by a large margin.
‍
In summary, vulnerability did not correlate with climate votes. And, certain legislators are statistical outliers. There are several highly vulnerable legislators with terrible climate records, and several with exceptionally strong climate voting records. 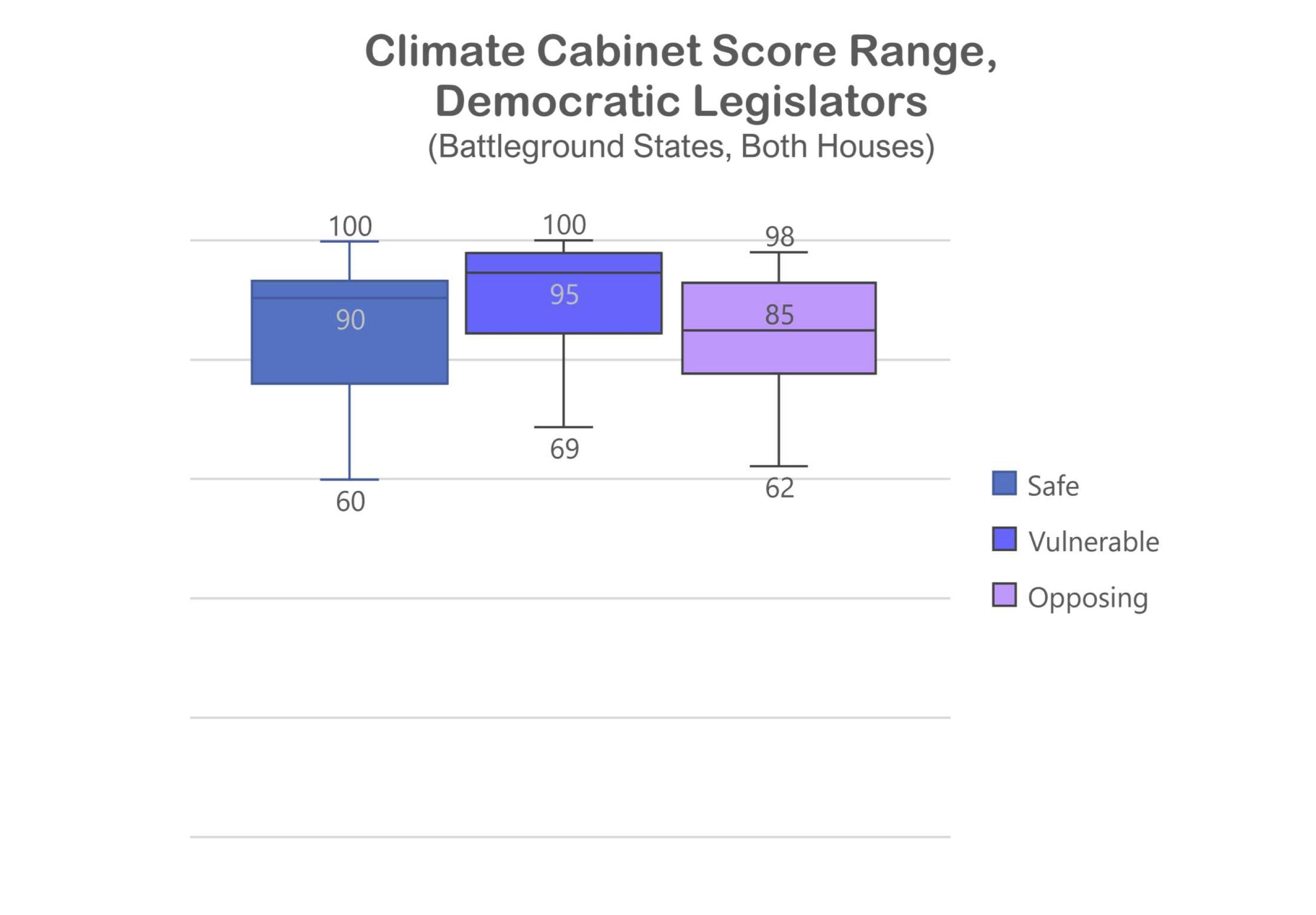 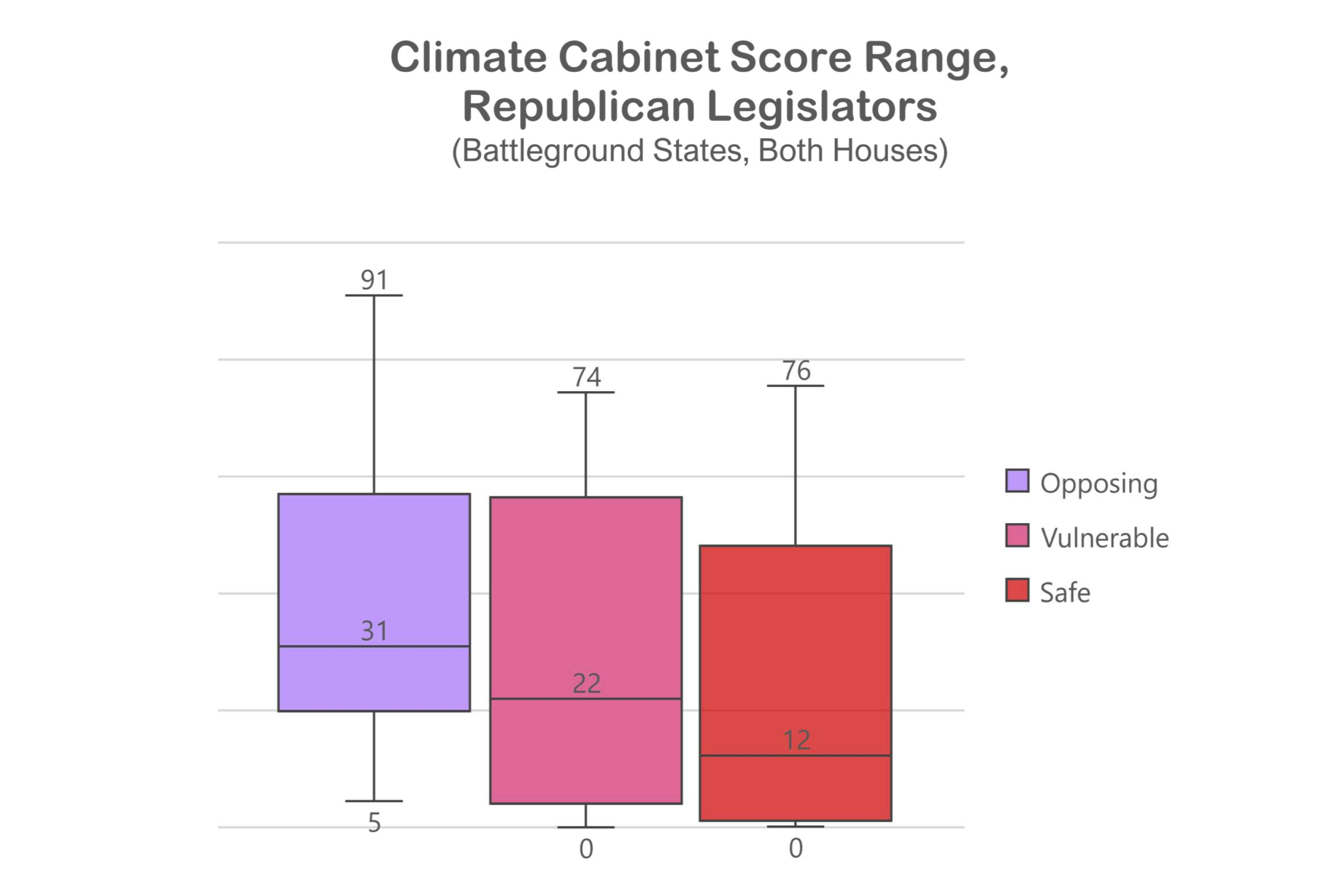 A majority of Americans think that the climate crisis deserves clear and immediate action. However, only some state legislators (mostly from the Democratic Party) are voting accordingly, even though they collectively hold immense power to solve the climate crisis.

If you’re interested in digging in further, you can access the entire database of Climate Cabinet Scores here.

Finally, if you’re a resident of the 10 battleground states, you can check out your legislator’s Climate Cabinet Score here.