With over 6,000 state legislative seats up for election this November, Climate Cabinet is faced with the challenge of determining which of these races climate investors and activists should prioritize in order to make the greatest climate impact. While our national Climate Scorecard tells us how well current legislators have been voting on climate legislation, we also need to know how vulnerable they are to losing their seats. To use our resources effectively, we should only try to protect good climate voters or oust bad voters where it makes the greatest difference, accounting for district competitiveness, primary competitiveness, and if their race could affect whether or not climate champions are in the majority party.
‍
In a redistricting year this problem becomes more complicated as each race is run in a district that has never existed before. Rather than simply looking at how a district voted in past years, we have to consider each precinct (the smallest unit that reports vote counts) and match it to the new district it falls into. This allows us to identify the voting preferences of every new district, ensuring that investments towards strong climate candidates are going to the races with the highest returns.
‍
As an example let’s look at North Carolina, a state with a long history of unlawful gerrymandering and frequent map changes. The recently approved state legislative maps in North Carolina are currently in litigation, delaying the primary date and resulting in a pause in candidate filing. Even without knowing who specifically is running in a district, we can still identify districts that will be competitive in the general election.

To start, we take election results for 2016, 2018, and 2020 and calculate a partisan voter index (PVI) based on the two-party political lean for each precinct. Our PVI is calculated as the percentage of two-party votes over 50% that went for the majority party. For example, a PVI of D+5 means that, of the voters that did not vote third-party, 55% voted for a Democrat. Figure 1 shows the PVI for all precincts in North Carolina based on the 2020 presidential election results. 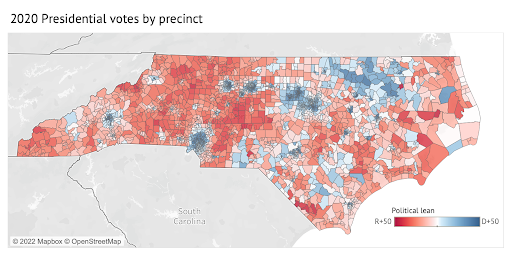 ‍Figure 1. North Carolina political lean by precinct, based on 2020 presidential votes.
‍
Individual races can diverge from the overall voting trend, so we consider many state-wide races for our overall political lean estimates. In North Carolina, we factor in election results for President, US Senate, and 12 statewide offices: Governor, Lt. Governor, Secretary of State, Attorney General, Auditor, Treasurer, State Supreme Court, State Appeals Court, Labor Commissioner, Insurance Commissioner, Commissioner of Agriculture, and Supervisor of Public Instruction.
‍
Notably, the state Senate and House of Representatives elections are missing from the races we consider. Redistricting Data Hub, a nonpartisan aggregator of redistricting data, details some of the difficulties with mapping election results to precincts. For our purposes, the variety of elections covered gives us enough confidence in partisan lean to significantly narrow down competitive districts.
‍
Using precinct-level returns, we can extrapolate historical vote trends to new districts. (We can actually further break down precinct votes by census block, however in North Carolina new districts have been drawn around existing voting precincts, so further detail is not necessary.) Figure 2 shows how precincts in the new House districts surrounding Asheville voted in the 2020 presidential election. 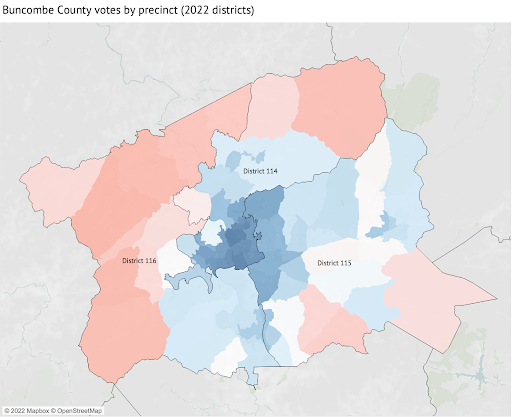 Figure 2. Buncombe county two-party vote shares by precinct, based on 2020 presidential votes, with 2022 House districts overlayed.
‍
Averaging results from 30 historical elections, we estimate that HD114 leans D+22, HD115 leans D+11 and HD116 leans R+5 (following the examples shown in the figure above). With district 116 at the edge of the competitive range (which we roughly define as R+5 to D+5, noting that in a possible GOP wave year there may be a skew) we flag it as a district to watch.
‍
Further applying this methodology to each new district in North Carolina, we can highlight 25 House districts and 9 Senate districts to focus on (Figure 3). Faced with 170 total districts it’s very useful to know that we can focus on just 20% of them - if we only want to know which districts are likely competitive in the general election. Then of course, we ground-truth this analysis through conversations with place-based partners.

By scaling this to the rest of the country we can keep our eyes on the full picture but put our effort just into where it counts. 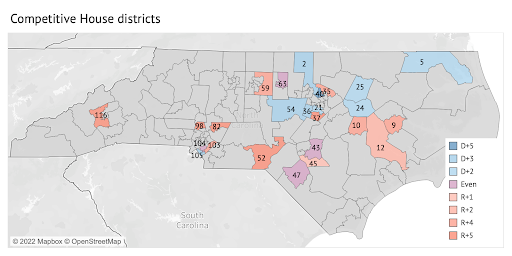 Figure 3. North Carolina House districts with a PVI between R+5 and D+5, given working maps (note: these are subject to change).