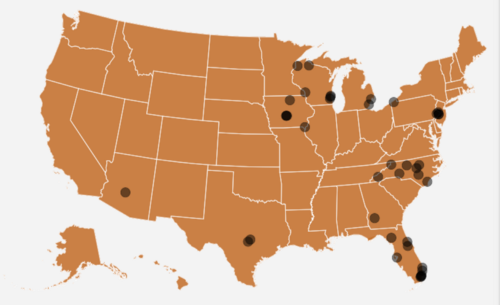 Join us as we dive into the data at the intersection of climate change and electoral politics.

Each passing election cycle presents not only an opportunity to elect thousands of elected officials to shape federal, state, and local policy, but also an opportunity to harness the power of precinct-level election results data to analyze and understand the dynamics underlying American politics.

Election data is deeply relevant to organizations working on climate. We’re here to explain why.

Every election cycle, the MIT Election Lab compiles a repository of precinct-level election results at the Presidential, Congressional, State, and Local levels for all 50 states. The MIT Election Lab, whose stated mission is to support “advances in election science by collecting, analyzing, and sharing core data and findings,” releases these publicly available datasets for analysis.

However, although there is broad recognition of the important role that elections play in winning climate policy by electing legislative majorities more favorable to climate issues (read: Democrats vs Republicans), there have been few efforts historically for climate-oriented organizations to dive deep into these election results datasets and scrutinize the dynamics and paradigms governing elections.

This is a missed opportunity.

Even though election datasets are neutral, nonpartisan, and seemingly unrelated to climate, they nonetheless capture important insights regarding the politics of climate change. Better understanding these political dynamics underlying climate issues is important to inform strategies for more effective campaigns and governance for pro-climate candidates and elected officials.

For example, take the issue of “downballot dropoff.” Historically, Democrats have often underperformed in state-level races compared to their Republican counterparts, for a variety of reasons. This so-called downballot dropoff has important ramifications for climate. As our previous analysis titled The Divided States of Climate Action explains, U.S. state legislators are split along party lines based on their support for climate action and legislation. Similar analysis from Vox underscores this partisan divide on climate and, therefore, the need for the election of Democrats across the ballot to push for progress on climate legislation, at the federal, state, and local levels. Democrats underperforming in state and local races therefore means significant gaps in state-level climate policy.

One explanation for why Democrats tend to fare worse in “bottom-of-the-ballot” races is that Democrats have historically focused more on federal elections, while Republicans have taken greater measures to educate voters and raise awareness about state- and local-level elections. Our analysis on downballot dropoff, based entirely off of the MIT Election Lab dataset, suggests that the relationship between the political parties and their performance at federal, state, and local levels is complicated and contains important nuances that require significant further analysis to ensure proper conclusions are drawn. Given that state and local decision-makers play a critical role in driving the clean energy transition and dealing with climate change’s impacts, it’s important for us to understand voting patterns across the ballot. We intend to share the results of our downballot dropoff analysis for the 2020 election cycle in the coming months.

Elections play a deeply important role in shaping climate policy. Take the Arizona State Legislature. Arizona HB2248/SB1175 could strip the statewide Public Utilities Commission of its authority to mandate clean energy and punted powers to establish energy policy to the GOP-controlled state legislature, which had resisted efforts to establish ambitious clean energy goals. However, while the Arizona House of Representatives has passed its version of the bill, the Arizona Senate has not voted on it. Because the GOP only holds a one-vote majority in the Senate and at least one Republican Senator has already expressed opposition to the bill, it appears likely that the bill would not pass. The session is almost over and the bill likely won’t even get a vote on the Senate floor. If the Republican margin over Democrats in the State Legislature were any wider, perhaps this attack on clean energy would have succeeded.

Or take the Virginia General Assembly. You may recall that, in 2017, a random fishbowl drawing determined which party would have majority power in the state legislature. Indeed, for Virginia House of Delegates District 94, the 2017 election yielded a perfect tie, and the winner of the random drawing happened to be a Republican. No significant climate legislation passed during that legislative session. Fast forward to 2019, when the chamber flipped and a Democrat ultimately won the seat, replacing the former Republican state lawmaker. Once Democrats regained control of the state legislature, Virginia passed significant climate legislation. The Virginia Mercury reports that Virginia passed a series of climate bills, including a set of “Clean Car Standards requiring manufacturers to deliver more electric vehicles to Virginia dealers” (HB1965), a statewide transit equity analysis (HJ542), an electric vehicle rebate program (HB1979), development of a series of strategies on transportation electrification (HB2282), and a school bus electrification fund (HB 2118). These efforts were capped off by Virginia’s landmark legislation, the Virginia Clean Economy Act, that made it the first state in the South with a goal of achieving carbon-free energy by 2045. The flip from Republican to Democratic control immediately unlocked landmark climate progress in the Virginia state legislature.

It has become increasingly paramount to draw connections between climate change and politics, with a particular focus on elections. Indeed, these case studies suggest the powerful role that elections play in shaping favorable outcomes for climate action across state legislatures.

Yet, a fundamental problem exists in American democracy: the opinions of the general public are not being reflected in or expressed by politicians and the policies they are passing. The stakes of this problem are no greater than with climate. Americans across both political parties increasingly demand government action on climate change and, while there have been some favorable steps taken under the Biden Administration, Congressional and state legislature support for popular climate policies appears deeply divided along party lines. Focusing on better understanding how and why elections produce the results they do — and how to leverage strategic opportunities — are critical to ensuring the success of pro-climate candidates and pro-climate policy.

Our aim for this series is to call attention to the intersection of climate and politics. We hope to encourage similar efforts, discussions, and collaborations to better analyze the complex dynamics governing federal- and state-level climate policy and elections and motivate action.

Moving forward, we hope to share our analysis and insights on these issues, and we welcome feedback and suggestions for further topics of interest. Please reach out to info@climatecabinet.org.
‍