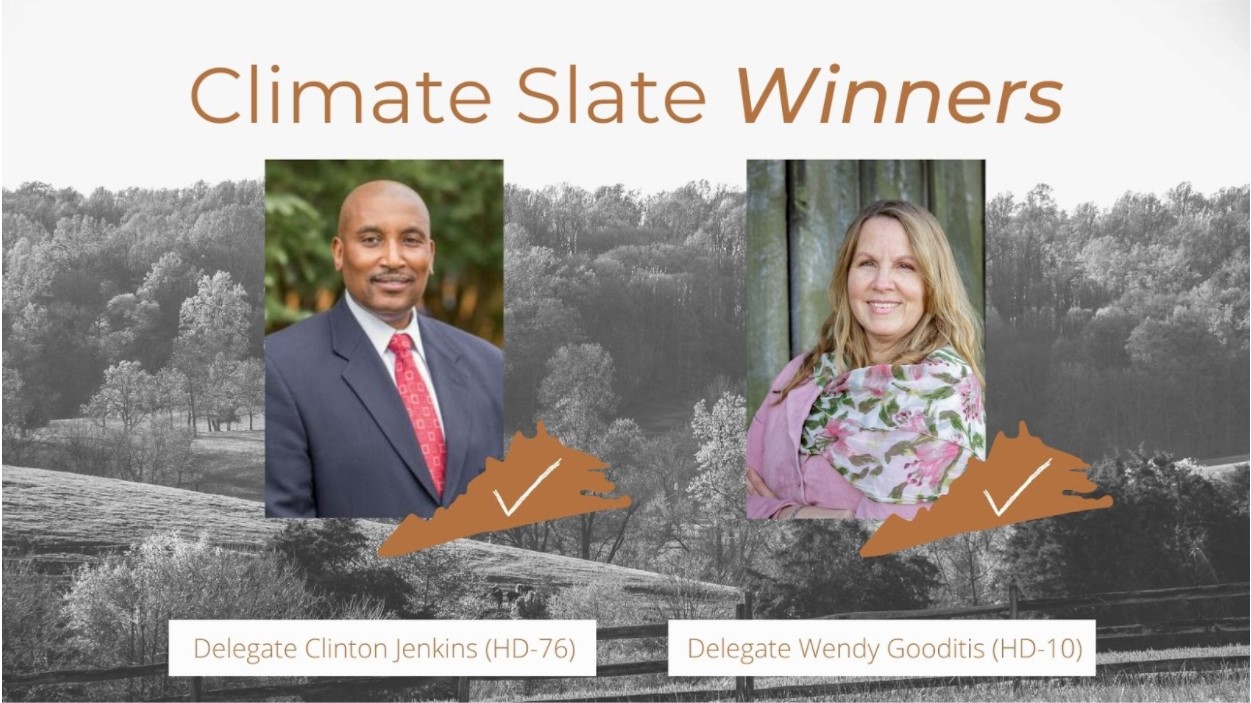 It was a tough election last week for pro-climate legislators in the Virginia House of Delegates as Democrats fell short of reelecting their legislative majority. Climate Cabinet was proud to support 10 climate champions in their campaigns — 8 incumbents who were critical to the passage of Virginia’s historic climate 2020 climate laws and 2 challengers running against notable climate laggards.

Two of our climate champions won — Delegate Wendy Gooditis (HD-10), a co-sponsor of the Virginia Clean Jobs Act (HB 1526), and Delegate Clinton Jenkins (HD-76). Both earned a Climate Cabinet Score of 100 through their consistent floor votes for climate and environmental justice bills.

And as of this morning, two Climate Slate races are too close to call though it is looking very good for Del. Kelly Convirs-Fowler (HD-21), who is currently up by 311 votes. Climate champ Del. Alex Askew (HD-85) is currently trailing by only 147 votes, triggering a recount. We are watching these results closely as the November 15th certification date approaches.

Thanks to you, Climate Cabinet Action fundraised for these ten candidates and went to work with our partners at Sister District to phonebank for our slate. You can see how close these tough races were. We are proud to have been a part of this fight.
‍
To add some additional context to the results, the Virginia returns followed a deep electoral trend in the Commonwealth for voters to swing toward the party who lost the presidency. In 5 of the past 7 state elections following a presidential election — 1993 to today — Virginians have given the House majority to the party out of the White House.

As we are disappointed by these results, we want to remember the power of electing climate leaders to state office — and why we are doubling down going into 2022.

The Democratic trifecta cemented in the 2019 elections demonstrated the power of having an ambitious, pro-climate majority in both houses of a state legislature and the governor’s mansion. In a swift period of legislative action during the 2020 session, Virginia reentered the Regional Greenhouse Gas Initiative, established a 100% clean energy standard with a 2050 deadline, established a significant flood prevention and coastal resilience fund with a focus on the communities most at risk, and uplifted environmental justice in their planning efforts and resource allocation. In doing so, they made huge advances for Virginians’ health and the future of the Virginia economy.

These climate wins are popular and deliver real benefits to Virginians. Together, we must keep building community power that will send local climate leaders to state office.