Climate is finally a winning political issue — but the top of the ticket failed to drive downballot Democratic success in this election.

Moving forward, it’s clear that state-level progressive infrastructure must be dramatically built up in order to win climate victories in Statehouses across the U.S.

Here are Climate Cabinet Action’s takeaways and results from this cycle.

ELECTION TAKEAWAYS:
‍
● Climate is a political winner. Climate was consistently a top issue for voters throughout the election. It was Biden’s closing argument, and now it’s a top priority for his administration’s transition into office.
● Downballot candidates did not sufficiently benefit from top-of-the-ticket success. In order to win pro-climate majorities in Statehouses across the US, we need long-term, strategic state-level organizing and investment.
● We need to invest in state-level progressive infrastructure, and start earlier. In order to legislate on climate, we need to flip state chambers from red to blue — and we cannot rely on the top-of-the-ticket to pull these local races. As a collective, we need to invest in long-term progressive infrastructure in the states, and drive resources to downballot candidates earlier. Spending spikes in Q4 come too late.

OUR POST-ELECTION STRATEGIC PLANS:
‍
‍● Add capacity to existing progressive infrastructure: we will get involved with the Democratic candidate recruitment and training pipeline, helping to bolster the depth and coordination of a winning clean energy message across the board.
● Demonstrate the political power of the climate community: we will be releasing a report on the climate community’s collective contributions to state and federal races this cycle, demonstrating the political salience of the climate movement as a whole.
● Leverage relationships with our winning candidates: we will ensure that the candidates we supported prioritize climate from day one, and have the resources they need to deliver on climate campaign promises. We’re working to get model legislation, winning arguments, and local support to state legislators ASAP. 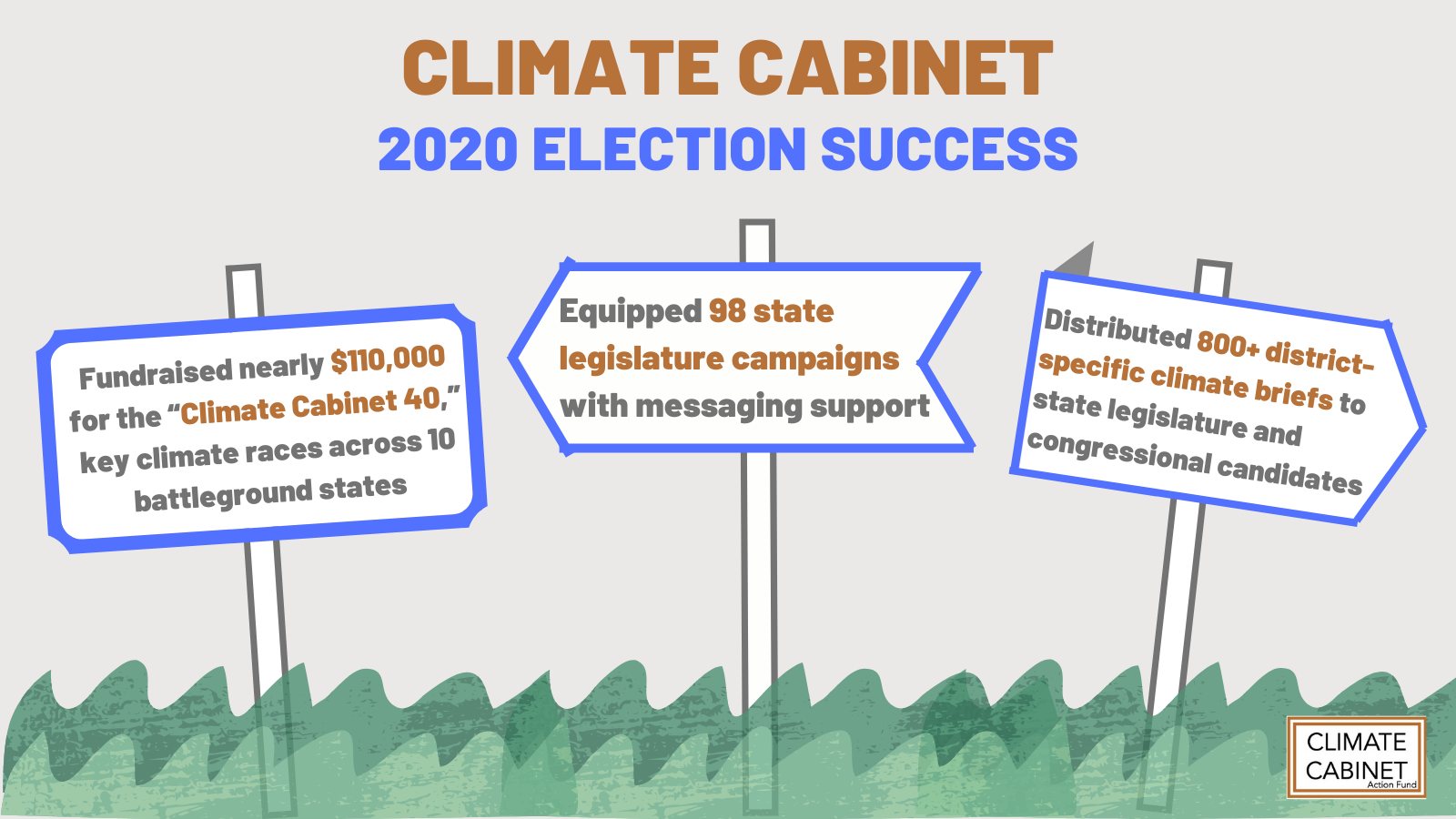 INITIAL RESULTS OF OUR WORK ON THE CAMPAIGN TRAIL:
‍
1. Driving climate-tagged donations to key races:
‍Raising the salience of climate on the campaign trail, and helping climate champs win.
‍
‍● We fundraised nearly $110,000 in climate-tagged donations for the “Climate Cabinet 40” key climate candidates in 10 battleground states. Our median donation was $100 and the mean was $195, showing that we leverage small and large dollar donors.
‍● Candidate success and insights:
- 14 of the “Climate Cabinet 40” candidates won, with 2 candidates in races that are still too close to call. This is a 37% win rate for races called.
- Competitive downballot districts did not benefit from an anticipated “blue wave.” Democrats failed to flip competitive chambers in Texas, North Carolina, Iowa, Pennsylvania, Michigan, and likely Arizona, and lost ground in Florida. Wisconsin Democrats successfully fended off a GOP supermajority.
- Major losses in Florida and Texas point to a systemic overreliance on top-of-the-ticket “pull,” and indicate a need for deeper investment in critical state races.


2. Equipping candidates to campaign on climate — at scale
‍Ensuring candidates are fluent in winning, local arguments.
‍
‍● We distributed 800+ district-specific climate briefs to state legislature candidates in TX, CO, and NC, and Congressional candidates in all 50 states.
● 98 campaigns opted-in to ongoing support, including meetings with campaign staff, natural disaster rapid-response, debate prep, and talking points for mobilizing voters.
‍● Insights from candidate education:
- Early engagement is key: candidates were twice as likely to opt-in to climate engagement and support during the primary stage.
- Downballot and competitive candidates need resources: 24% of all Democratic state legislature candidates in CO and TX opted-in for climate messaging support, as did nearly 20% of all Democratic House Congressional candidates in “Tossup” districts.
● Candidate success:
- 19 of the 28 “competitive” Congressional and Statehouse candidates we worked with won their races and 2 of these races remain too close to call.
- We also chose to provide resources for candidates in non-competitive districts in order to push climate on the campaign trail, across the board.

Contact us at info@climatecabinet.org to support our work or learn more.


*Here we define “competitive” races as districts with a 2016 Presidential vote margin of R+5% or less. At the time of publication: Three Congressional races and two Statehouse races remain too close to call.
‍
*This recap was originally published and shared with Climate Cabinet Action supporters on December 8, 2020.