State Battlegrounds:
How States Lead on Climate Action... And Hold Us Back

We probably sound like a broken record: we can’t tackle climate change without state leadership. State legislatures are the under-the-radar battleground for our future.
‍
In the face of lagging federal climate leadership over the past few decades, states have stepped up and written the playbook for transitioning to clean electricity. In fact, since 2000, nearly half of all growth in renewable electricity generation and capacity in the US has been mandated by Renewable Portfolio Standards, or clean energy requirements, set by states.
‍
Coordinated cross-state efforts to transition to clean energy are working. But while some states are ratcheting up ambition to tackle the climate crisis -- others are locking us into a polluting economy. They’re doing this (1) through their own jurisdiction over powerful state-level regulations, and (2) through their positioning to either help or block both local and federal efforts as well. Let’s walk through both of those in turn:
‍
States have important jurisdiction over the clean energy transition

State governments are on the frontlines of dealing with the impacts of climate change, directing the clean energy transition, and determining whether these changes will exacerbate inequality or work to address it. They can open markets for clean energy and transportation technologies through policy and their own procurement efforts — or slam those doors shut to protect polluters. States are responsible for significant transportation spending, both for dirty highway spending and clean public transportation systems. And, play an important role in preparing for and responding to natural disasters, addressing ongoing environmental injustices, and ensuring resilience in all communities — or not. Where states choose to invest resources determines which communities benefit, and which get left behind.

Let’s start with the many ways states are using that power for good. Here are some of the critical ways states are stepping up to the plate as leaders in the fight for climate justice: 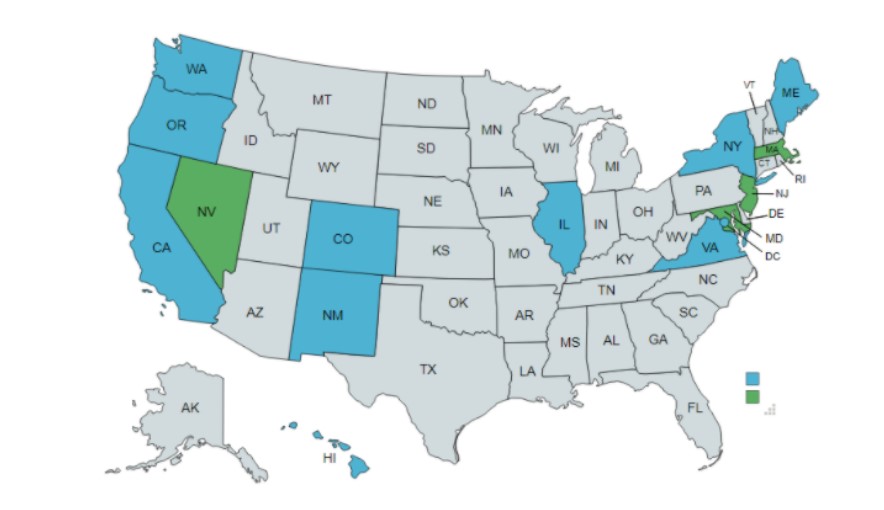 Policies crafted in states become the blueprint for other states and Federal action. Great ideas and leaders are tested in states and can be directly channeled into stronger national policymaking.

There is a long way to go, but states are showing the way, and are responsible for many of the biggest climate and renewable energy wins we’ve seen to date.


Captured States: Blocking Local and Federal Efforts
‍
Leading states have enabled big steps forward, but state governments are also capable of holding climate action back -- often in insidious ways, which we’ll get into below. But because of their nexus between local ambition and federal implementation -- states also have the power to block efforts across levels of government, including city, county, and federal actions.
‍
In our analysis of thousands of state climate bills, these disturbing patterns rose to the top, clearly demonstrating states’ power to block climate progress across levels of government:
‍
States are blocking local action:
‍Many cities and small towns are stepping up as leaders in the clean energy transition -- fighting for their residents’ health, safety, quality of life, and pocketbooks. However, many states are pre-empting cities’ authority to make progress on critical climate issues: from blocking cities’ efforts to ban fracking within their boundaries to preventing them enacting local ordinances that would require new gas stations to install electric vehicle chargers, phase out gas in new buildings, hold polluters accountable, and more. Too many states are blocking local efforts to protect residents and take climate action seriously.
‍
In 2020 and 2021, 23 states considered or passed bills to pre-empt cities from requiring new buildings to be all-electric. This is an existential threat to climate efforts, since buildings use almost 30% of energy in the US, and electrifying buildings is the first step to powering them off of the sun and wind. We can’t do that if states prevent us from phasing out fossil fuels like gas.
‍
State pre-emption laws are sneaky attacks on communities and climate action. They’re flying under the radar, and we need to prepare for more attacks like this now. 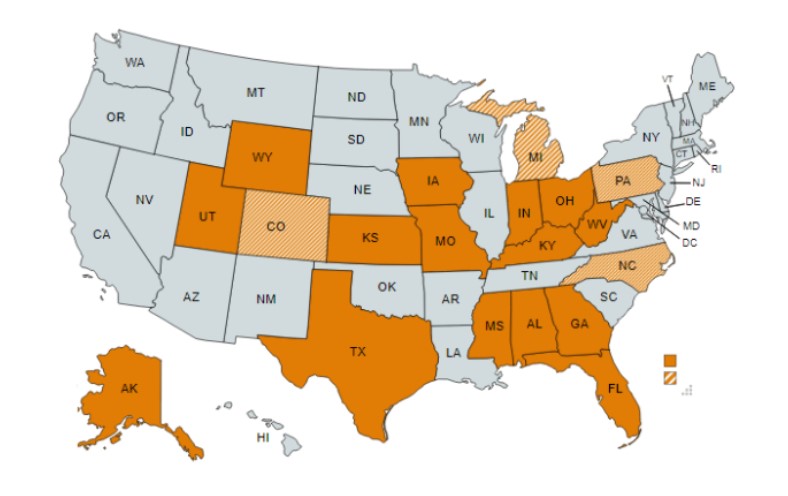 In 2020 and 2021, at least 23 states passed (solid orange, above) or considered (orange stripes) bills pre-empting cities from phasing out natural gas in new buildings.

States are a gatekeeper for federal action:
‍But it’s not just local action that states can inhibit. States also have a big role to play in leveraging federal funding and implementing federal programs. As such, they can determine whether federal efforts succeed or fail. For example:

There are countless more examples of states blocking both local and federal climate goals. 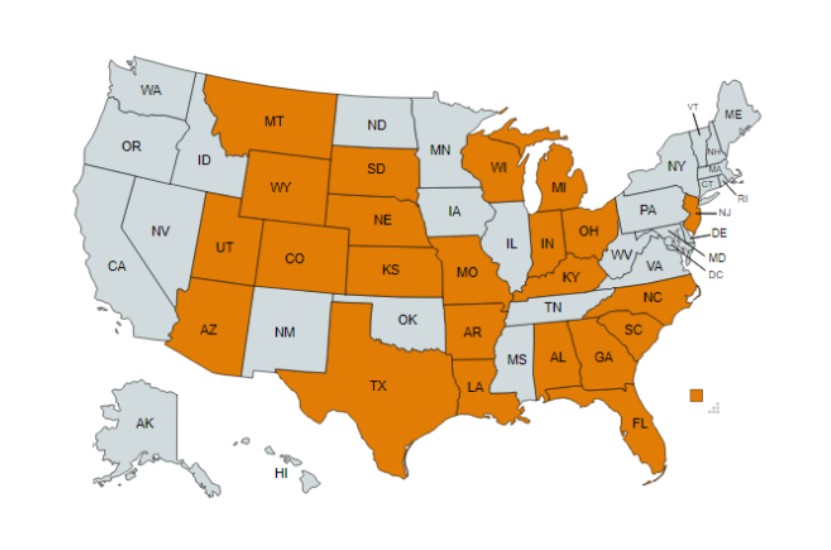 This map shows which 24 states sued the Obama administration over the Clean Power Plan.

Other ways states are using their power to block climate progress:

‍Fossil Fuel Subsidies
‍If you think the federal government is the only body large enough to subsidize fossil fuels, think again. States like Wyoming and Montana are trying to sue other states for phasing out coal. In Pennsylvania, HB732 created a $670 million, 25-year tax credit for petrochemical and fertilizer manufacturing facilities that use natural gas produced in Pennsylvania, a huge subsidy for the fracking industry. Texas requires state entities to divest from companies that cut ties with the fossil fuel industry. Fossil technologies can’t compete on their own, so their political allies attempt to throw money their way to keep them competitive and polluting. Subsidizing coal, oil, and gas is incompatible with a livable future.
‍
Bad faith regulatory power grabs
‍Legislators make laws; regulators implement them. At least that’s how it’s supposed to work. Recently, we’ve seen many instances of fossil fuel-friendly state legislatures wrestling power from regulators, agencies, or other elected officials working to implement environmental rules on the books. For example, Pennsylvania tried to use the Covid-19 pandemic as a reason to gut the Department of Environmental Protection’s ability to set clean air, water and climate regulations. In Wisconsin, state agencies are prevented from creating rules that cost more than $2M in implementation without GOP-controlled legislature approval. In Arizona, the state legislature attempted to take utility regulation from the Public Utilities Commission so they had direct power to block clean energy deployment.

Attacks on democracy and protest
A clear majority of Americans want to see more money invested in renewable energy and are worried about climate change. But, this overwhelming public opinion isn’t being reflected in the decisions made by many state legislatures. Rather, Republican state officials are attacking the right to vote — obstructing democracy in favor of polluters and other special interests.

Beyond voter suppression, more than 14 states have passed laws criminalizing protests of fossil fuel infrastructure like pipelines, which has been a successful tactic for delaying these projects. Similar legislation has been proposed in almost half of all states, despite the constitutional rights to speech and peaceful assembly.

Through these means and others, state legislatures are blocking progress. Meaningful climate action will depend upon breaking the fossil fuel industry’s lock on state power and getting climate champions elected into every legislature in the nation.
‍

Conclusion
‍
As our past analyses of Climate Cabinet Scores have shown, it’s not hard to see which party is fighting for our future and which is locking us into a polluting economy. When Democrats win majorities, climate bills pass.
‍
Given their critical role: states have helped the US achieve some of our biggest climate gains to-date. But other state actions are locking us into a destructive fossil fuel economy. Regardless of what decisions the federal government makes (crucial, of course), failure to play at the state level will prevent us from scaling up bold, equitable climate progress at the speed and scale necessary.
‍
States are the battleground for climate justice in the US.  2022 will be a big year for the Congressional Midterms, and a huge year for determining state legislature control. We know the fossil fuel industry won’t sit this one out -- and the climate and clean energy movements can’t afford to either.


--
Read more about the breakdown of Climate Scores across states and the importance of state legislatures in our most recent Climate Cabinet Scorecard report.

All images in this blog were created using MapChart.net